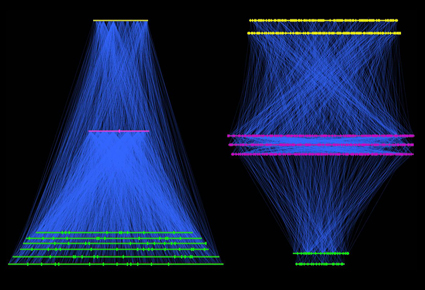 The reason living organisms tend to malfunction less than computers may have something to do with the way software engineers create control systems—compared to nature’s approach.

Both E. coli and the Linux networks are arranged in hierarchies, but with some notable differences in how they achieve operational efficiencies. The molecular networks in the bacteria are arranged in a pyramid, with a limited number of master regulatory genes at the top that control a broad base of specialized functions, which act independently.

In contrast, the Linux operating system is organized more like an inverted pyramid, with many different top-level routines controlling few generic functions at the bottom of the network. Gerstein says that this organization arises because software engineers tend to save money and time by building upon existing routines rather than starting systems from scratch.

Sigue leyendo Futurity.org – Why computers crash but we don’t.