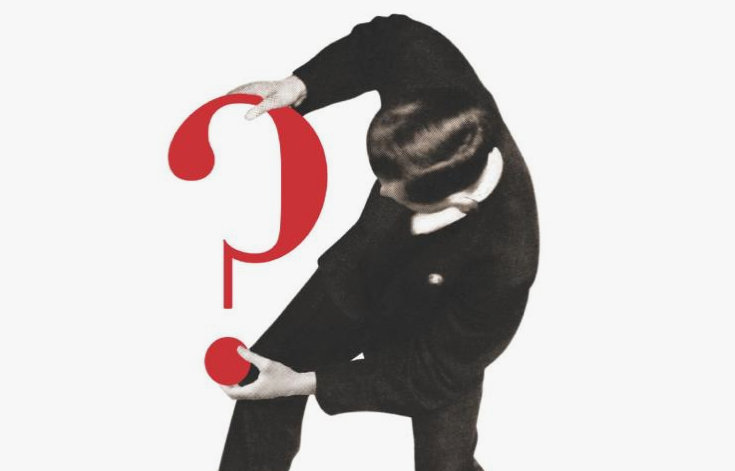 “Does the question of where all the garbage goes and how can it not soon not be able to go there bother you?”

“Do you grasp the principles of the thermocouple?”

“Have you chosen the way you’d like to die?”

“If we were bombed back into the Stone Age, as whatshisname proposed in Vietnam, would you have any idea how to go about making electricity?”

“If you learned that you would expire tomorrow at 5:00 P.M., what would you seek to do until then?”

“When you visit old folks’ homes and are mistaken by the senile for their own relatives, what do you do?”

“Are you a physical coward? Are you bothered by your cowardice? What?”

“Did anyone instruct you in the matter of shaking hands?”

“Have you ever heard the saying, Life is a sandwich of activity between two periods of bed-wetting?”

“Do you know that part of the field examination for head injury is called the doll’s-eye test?”

“Have you ever seen a large game animal up close in the wild?”

“Do you find teachers of math dangerously seductive?”

“Would you rather see a season of bullfighting or take a course in machining metal?”

“How often when you ask yourself what are you forgetting does it prove you are forgetting something?”

“would you say that American rock music and American cars have their classic periods in strange synchronization, and that the two hottest periods were around 1955 and 1969? Is it fair to say that there has not been a good American car since 1969 and that rock ’n’ roll was petering out hard after that? How can men at drafting tables in pocket protectors in Detroit and boys in jeans and long hair at synthesizers in Macon, Georgia, have been so in tune?”

“If you had a loud 400 hp 1969 GTO with a Hurst three-speed on the floor and the Allman Brothers’ “One Way Out?” playing as loud inside the car, would you not be unstoppable not only in all the serious adolescent ways but even now in nearly all of the serious postadolescent pre-senile ways?”

“If integrity resides in failure, does the abnegation of integrity reside in success? If it is the case, and certainly it must be, that integrity does not always reside in failure, but only when the failure is not casual and not the fault of a want of industry or ambition, and so on, on the part of the failer, then of course it is the case that the abnegation of integrity does not always reside in success, but only when the success is some evil stripe of it that someone has figured out the world does not need more of but that was usually thought of as pretty hot when it got started, like say populating the earth and land development—early successes, as it were, that turn into wholesale fucking disasters…and is it clear to you that I cannot for the life of me think of what the proper opposite of “integrity” is, hence this fey “abnegation of integrity”? Can you think of what the opposite of integrity is? ”

“What would be the most fun thing you could do, right now?”

“If you could be instantly fluent in a language you do not now speak, what language would it be?”

“How many screwdrivers do you think is necessary for able-bodied normal household maintenance?”

“If there were a service whereby everything in your apartment or house could be made to disappear (called House Fire without Fire), without any mess or hassle or delay, and you would receive, in compensation, partial value of the material that disappeared, what partial value would be necessary for you to contract with this service?”

“Do you know the different kinds of courses in which brick and block can be laid?”

“If you could witness a whirling dervish performance or a full-blown municipal riot, which would you take?”

“What has been so far the best single day of your life?”

“Do you know the names of shoe parts?”

“Do you do a good job when you wash windows or does something always seem to be left undone, perhaps putting you in that inside-outside debate?”

“If you had a little booklet of Post-its printed up to say “Repair in order,?” how many of these would you properly have to apply to things around your house or apartment or life in general?”

“Have you done any mountain climbing? Would you eat a monkey? What broke your heart?”

“Have you seen a person recently so delicious-looking that, were you and this person to be scrambling for ice-cream change with your arms in the sofa and your faces laid on the cushions looking at each other as you felt for coins and the ice-cream truck dinged on by and your hands in there felt only the lint of the sofa scrofula and your faces were fairly close across a distance of that knobby nylon terrain, you might feel compelled to slide your face toward this delicious-looking person’s and kiss him or her—have you seen anyone like this recently? Would you like to see a person so delicious-looking that you might feel compelled to try to kiss the person without, as it were, propriety? Do you know what conservative bone-fracture management might mean as opposed to nonconservative bone-fracture management? Would you take a ballet class now?”

“Do you eat cake for the icing or icing for the cake?”

“Does the prospect of a pet’s outliving you give you pause? Can we relax and trust that our wishes in these regards, our posthumous affairs as it were, will really be administered as we have stipulated, or will we be frustrated and yelling through the glass walls of heaven or the hot opaque obsidian walls of hell at the corrupt disregard for our eternal wishes?”

“Have you read as much Samuel Johnson as you should have?”

“is it not the kernel of the demise of the world as we knew it that you can no longer watch candy be made “for insurance reasons?”? Does not someone need to stand up and say, “If I cannot have people watch my candy be made, as I have done for forty years without incident, because of insurance, I will not have insurance?”?”

“Do you have any impulse to wish that everything you own could somehow without overmuch trauma be made to disappear?”

“Have you ever been not disappointed by a banana split?”

“Can you love, still? Did you ever love? Is there heartbreak in rain, or cheer? Are you tired?”

“Would you have anticipated that Jack LaLanne would outlive Buddy Ebsen?”

“Does the phrase “rampart standard?” mean anything to you?”

“Was Luther’s declamation called the Diet of Worms, or did that refer to the convention that drew it up?”

“Would you think that your vocabulary shrinks, expands, or holds constant over time?”

“Does the term “bogolusian?” mean anything to you?”

“Does the prospect of hernia bother you more than might other more severe and more likely medical disorders?”

“Have you ever watched bats come out of a wall? How the soft, friendly things keep pouring silently out of the brick? How they have focus, and mission, and you do not? How they will not ever need a colonoscopy, and you will? How they won’t pay taxes? How they can fly without feathers; can, by will, as it were, lift themselves into the air?”