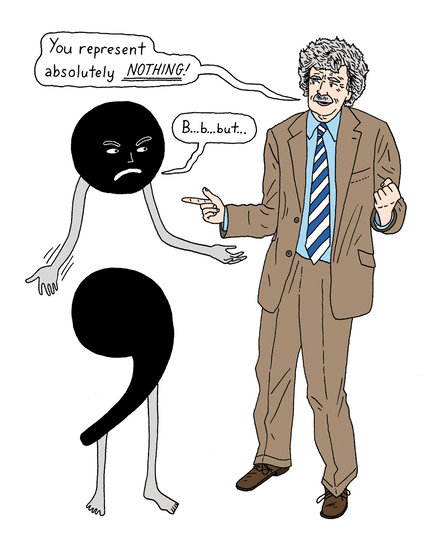 Here is a lesson in creative writing. First rule: Do not use semicolons. They are transvestite hermaphrodites representing absolutely nothing. All they do is show you’ve been to college.

And so, far from being pretentious, semicolons can be positively democratic. To use a semicolon properly can be an act of faith. It’s a way of saying to the reader, who is already holding one bag of groceries, here, I know it’s a lot, but can you take another? And then (in the case of William James) another? And another? And one more? Which sounds, of course, dreadful, and like just the sort of discourtesy a writer ought strenuously to avoid. But the truth is that there can be something wonderful in being festooned in carefully balanced bags; there’s a kind of exquisite tension, a feeling of delicious responsibility, in being so loaded up that you seem to have half a grocery store suspended from your body.